It was good to revisit some churches in north Wales, and see some new places in Cheshire, while acting as a guide for the Stained Glass Museum Study Weekend, alongside Jasmine Allen and Penny Hebgin-Barnes.

The opportunity to see new things in familiar places, with the help of a knowledgeable and observant group of people, ensured that all of us went away with something new. In familiar churches there were some things that I had not seen before. In the case of the two churches in Buckley for instance, there were windows that were not there the last time that I visited: at St Matthew’s a new little window painted by Deborah Lowe has been added, and a window by A.L. Moore from a closed church in Manchester has found a new home in Emmanuel Church, Bistre.

As the tour included churches and private chapels that I had not visited before, there were a few things in particular that I learnt from the trip, and here are three of them.

1. The work of the big studios such as Heaton, Butler and Bayne could be tremendously diverse.

Well, that’s not a great start because I already knew that, but it was underlined by the work of this firm that kept cropping up at a number of the places that we visited. This seemed especially noticeable as we were fortunate to start at Eaton Hall Chapel, where the entire scheme of windows was made by the firm, but to the design of Frederic Shields, who evidently excercised considerable control over its production. These windows bore none of the recognisable features of stained glass by the firm, and at successive churches – Rossett, Gresford, Malpas, Llanfarchell as well as at Chester Cathedral – we found their work in a wide variety of styles from the 1870s to the 1920s.

Incidentally, on my return I found some similarities between a few of the poses found in the Eaton Hall Chapel glass and a window I know better, the east window at Llanbadarn Fawr, which Frederic Shields designed with J. P. Seddon and was made by Belham & Co in 1884.

2. There are very close parallels between some of the Flemish panels at Cholmondeley Castle and those at Llanwenllwyfo

I have written about the collection of Flemish glass from the Neave collection, now at Llanwenllwyfo, Anglesey, on these pages and elsewhere. While researching the Llanwenllwyfo glass I have come across references to, and a couple of small illustrations of, the stained glass now at the private chapel of Cholmondeley Castle, so once again, although the above statement was not really new to me, the chance to see the stained glass at Cholmondeley enabled me to see this for myself and make some further observations (too many to detail fully here).

The design of six scenes now in the east window of Cholmondeley Castle Chapel is very close to some of those at Llanwenllwyfo such as Christ with Veronica, the Raising of Lazarus, Abraham Visited by Angels and David with Abigail. These were probably made in Leuven and may have come from the Charterhouse there. As well as the overall design of the panels, some of the figures are painted in a closely related style, and probably by the same workshop, and there are two examples of lettering used on the edges of garments to state the names of certain figures, found in several panels at Llanwenllwyfo. 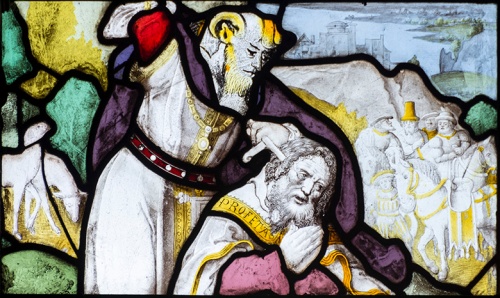 The detail illustrated here shows this and also the problems of identifying artists. It would seem that the head of the unfortunate prophet here does not match any of those at Llanwenllwyfo closely, but it also differs from that above it and the group to the right, raising the possibility of three hands at work in this single panel. 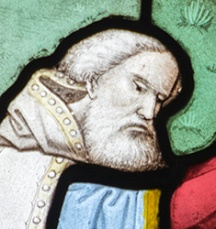 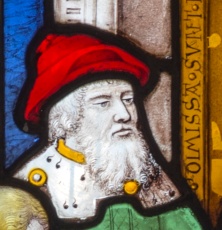 The heads of Samuel from Cholmondeley and of Simon the Pharisee at Llanwenllwyfo offer an example of a pair of heads that seem to match very closely, but not quite exactly. Since we really know very little about these panels, they could be by the same artist but separated by a number of years, by different painters in the same workshop, or the product of different workshops but closely following the work of the same designer. Whether they were originally made for the same location we will probably never know.

Three of the scenes at Cholmondeley retain their lower inscriptions, which may assist with further work on their origin and the workshops responsible for them, although none have any borders at their sides.

Finally, as an additional parallel to the stained glass at Llanwenllwyfo, a roundel at Cholmondeley also depicts Christ wearing a hat and holding a spade as he encounters Mary Magdalene after the Resurrection, a scene that is particularly distinctive at Llanwenllwyfo and was featured on the cover of the book about that church and its glass.

3. The firm of Ballantine of Edinburgh underwent a huge transformation in the first quarter of the twentieth century, or perhaps they didn’t 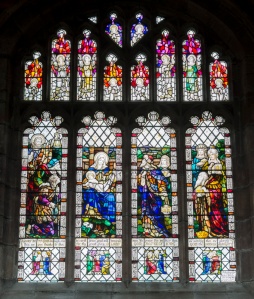 The Adoration of the Shepherds and the Magi, 1928, Church of St Oswald, Malpas

Visiting the Church of St Oswald, Malpas, brought me back to a window that had struck me on my first visit, a four-light window of the Adoration of the Magi. After I first saw the window I was surprised that the Pevsner (Clare Hartwell, Matthew Hyde and Nikolaus Pevsner, The Buildings of England: Cheshire, 2011) tentatively attributed the window to Ballantine of Edinburgh. Shortly before this discovery I had also been surprised that Peter Cormack, in his review of my little book on the stained glass at Tenby, had also suggested the firm as the maker of a window that I had been unable to attribute there.

Comparison of some of the faces in both windows suggests that they could perhaps have been by the same artist, although there was a little more painted shading in the little Tenby window. But were either of the windows products of the studio of Ballantine? 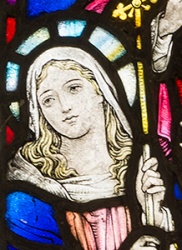 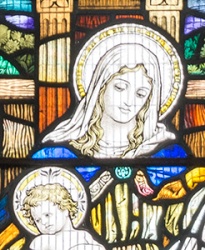 James Ballantine & Son (also Ballantine & Allen, and later Ballantine & Gardiner and then A. Ballantine & Son) was a long-lived firm that was established in Edinburgh by the 1830s and made stained glass for the House of Lords. Windows by the studio of the 1850s and 60s are found in north Wales, demonstrating a strong pictorial style with very fine painting and bright colours, but, by 1881, their window at Emmanuel, Bistre shows a duller colour palette in keeping with the times. A further window of 1890 at the Church of St Mary, Lenten Pool, Denbigh, also on our tour, demonstrates a very much more conventional Gothic Revival style typical of the period.

So after that recognisable change of approach, might they have embraced a style more in keeping with some of the best artists associated with the Arts and Crafts Movement so convincingly that they were able to produce the beautiful window at Malpas? Many on the tour thought not, but no other attributions were forthcoming.